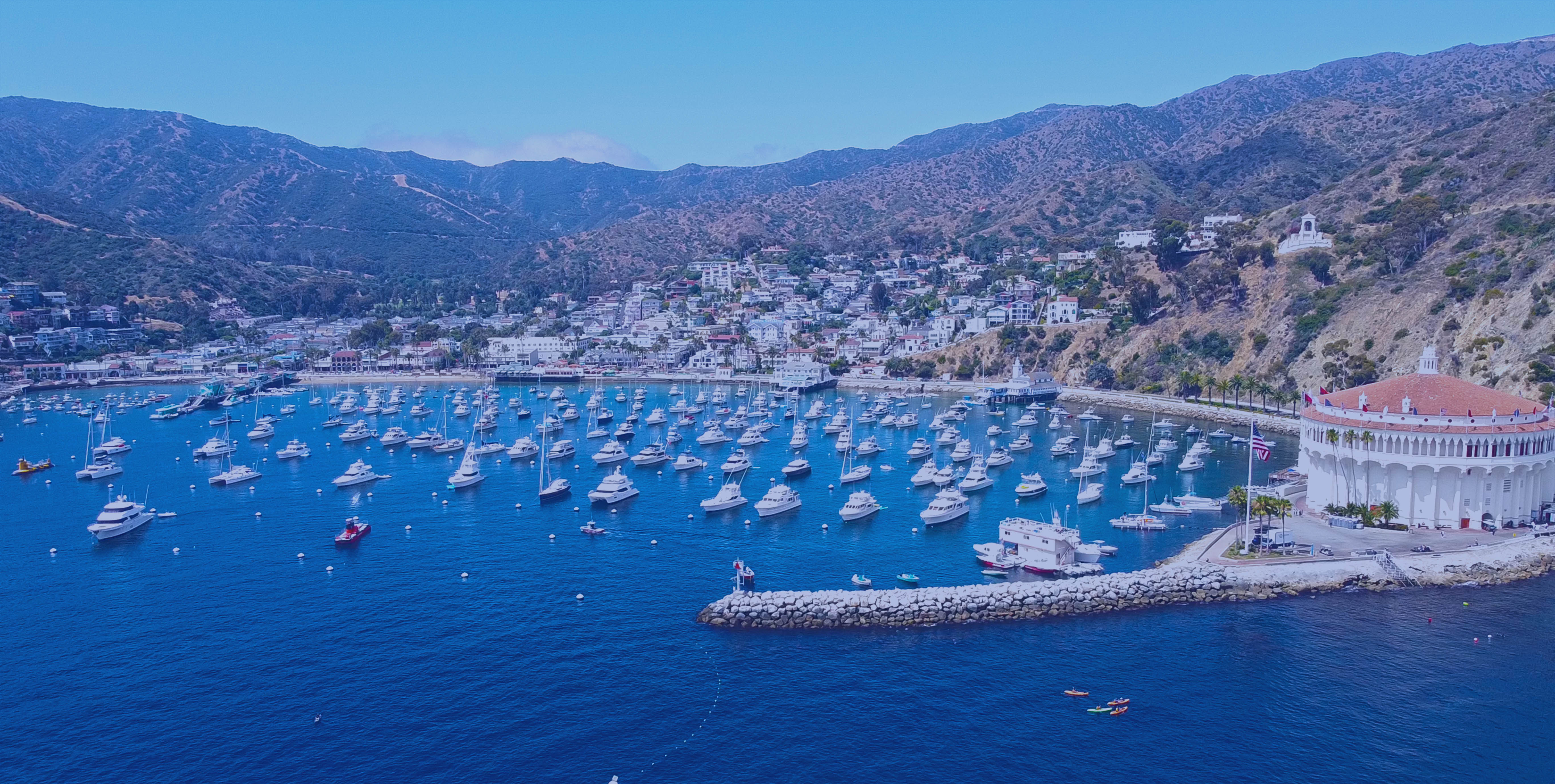 Just twenty-two miles off the California coast, Catalina has been a premier tourist destination for over one hundred and twenty years. Offering a wide variety of accommodations and activities, Catalina truly has something for everyone. Indulge in luxurious hotel and fine dining experiences in Avalon, or camp and explore the wild terrain surrounding Twin Harbors. 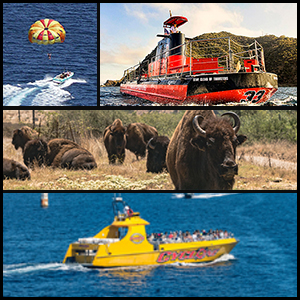 Wherever you stay on Catalina, make sure you explore the shore. Catalina Island offers water sports of all kinds, including; snorkeling, scuba diving, jet skiing, kayaking, paddle boarding, sport fishing, glass bottom boat and submarine tours, sailing, parasailing - and, of course, swimming! Cool off in the water or just chill out while observing some of Catalina’s famed marine life.

Inland Catalina has just as much to discover as the coast. Maintained by the Catalina Island Conservancy, 88% of the land on Catalina Island is a protected preserve with many natural wonders to discover. Stroll through the Wrigley Memorial and Botanic Gardens, or lace up your hiking boots and take on one of more than 165 hiking trails crisscrossing the island. You’re bound to see some breathtaking ocean views and you might even meet one of Catalina Island’s famed bisons. 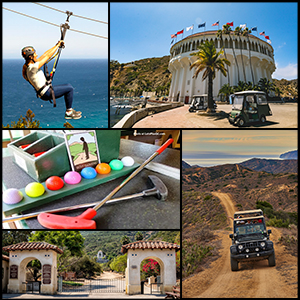 Beyond sea and sport, Catalina has activity and entertainment options for everyone, from large family gatherings, to the most intrepid of thrill-seekers. Although Avalon’s breathtaking Art Deco Casino no longer offers gambling, you can take a guided tour, or experience one of their annual events, like the elegant Catalina Conservancy Ball. Families can check out the Nature Center with several exhibits for children. Honeymooners might prefer to check out Lovers Cove, a short drive east of Avalon. Everyone can enjoy an ice cream cone at Scoops, Catalina’s premier Italian-style ice cream parlor, or enjoy a round of miniature golf.

For those looking for a little more excitement, Avalon offers a lively nightlife, with bars, karaoke and live music. True thrill seekers can try your luck at Avalon’s pirate-themed escape room, or take to the skies on the Catalina Island Eco Zipline. 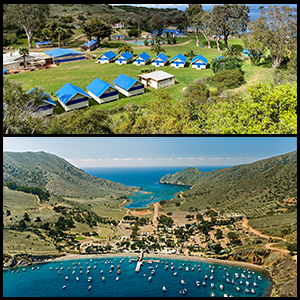 For those who like to vacation off the beaten path, Two Harbors offers a more rustic experience. Bring your own tent or reserve one of Two Harbors’ Tent Cabins and wake up next to the Pacific Ocean. You can also find lodging at the Banner Hotel, Villa Santa Cruz or Villa Santa Rosa. There are dining options and a general store for supplies a short walk from the campgrounds. For those really looking to escape the daily grind, try hiking the 38.5 mile Trans-Catalina Trail.

Though it’s been known by many names and been home to many different inhabitants, the Island of Catalina has been delighting visitors for over 8,000 years. Plan your perfect getaway now.

Over the years, Santa Catalina has been home to Native Americans, explorers, hunters, ranchers, treasure-seekers, film crews, millionaires - and even pirates!

The first known islanders on Catalina were the Tongva. They called the island ‘Pimu’ or ‘Pimunga’. The Tongvans were the first to settle in the many of the areas that we now know on Catalina, including Avalon, Two Harbor, and Little Harbor.

Although Catalina has been inhabited for over 8,000 years, Spanish explorers are credited with “discovering” it in 1542. The island was given its current name ‘Santa Catalina’ by the Spanish explorers who colonized the California coast. Catalina was claimed by Spain before ownership passed to Mexico. Although Catalina became part of the United States in 1848, along with the rest of California, it remained mostly uninhabited and was sold over the years to several private owners until the early 1900’s. Over the course of those years, the island was home to various groups, including whale hunters, sheep herders, fortune hunters and even a small contingency of Union soldiers.

George Shatto purchased the island in 1887 with dreams of turning it into a tourist destination. Although Shatto’s dreams never came to fruition, fragments of it have stood the test of time. Shatto’s sister-in-law suggested the name Avalon for Catalina’s main town. Shatto also built the Hotel Metropole. 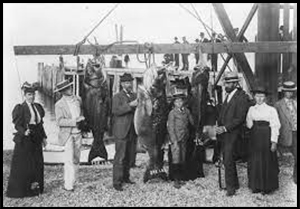 The island was purchased by the Banning Brothers in 1891. After establishing The Santa Catalina Island Company, the Banning Brothers built on Shatto’s dream of transforming the island into a destination, including constructing more attractions and creating some of the first roads into the interior of the island. Unfortunately, their vision went up in flames in Catalina’s devastating fire of 1915. Several Catalina landmarks burned down in this fire, including the Hotel Metropole. Luckily, Catalina’s original hotel was rebuilt in the same location and remains a top-rated hotel on the island. Like Shatto, due to circumstances beyond their control, the Banning Brothers were forced to give up on their plans to develop Catalina. 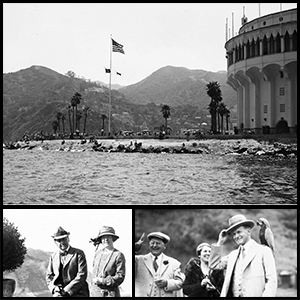 Wrigley gum magnate William Wrigley Jr. purchased the majority of shares of the island in 1919. He finally was able to transform the island into the resort getaway that Shatto and the Banning Brothers envisioned. Wrigley built the famous Catalina Casino and the picturesque Mt. Ada - the mountaintop home Wrigley named after his wife Ada. If you want to live like a millionaire for a few days, Mt. Ada has been transformed into a luxurious 4-star hotel. Wrigley also saw the recreation and publicity potential of Catalina Island. Beginning in 1921, Wrigley began bringing his beloved Chicago Cubs to Catalina for Spring training. 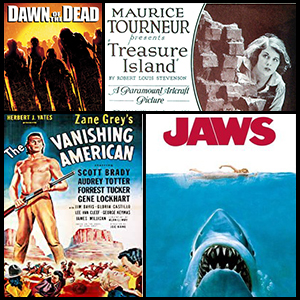 Catalina also became a popular filming destination. Old classics like Treasure Island (1918) were filmed there, as well as more modern nail biters, including Jaws (1974) and Dawn of the Dead (2004). In 1924, fourteen American bison were brought to the island as part of the filming of Zane Grey’s The Vanishing American. While the crew eventually left, the bisons remained to become an integral part of the Catalia legend.

Alas, Catalina Island has also seen its share of controversy and tragedy. In 1972, members of the Chicano activist group The Brown Berets staged a stoic, but ultimately unsuccessful occupation of Catalina Island, claiming that the treaty that gave California to the United States never mentioned the Channel Islands. Although the occupation of Isla Catalinas did not lead to change, the activists garnered attention, as well as support from the Mexican-American community. In 1981, famed movie actress Natalie Wood fell off her yacht Splendor and drowned under mysterious circumstances near Two Harbors. The island has also had to battle a few blazes, most notably the Empire Fire in 2007.

In recent years, the Santa Catalina Island Company has invested heavily in improving Catalina’s sewers and sanitation systems. They’ve also initiated several large-scale improvement projects. Due to the island’s reliance on tourism, Catalina was particularly hard hit by the Covid-19 quarantine. Locals rallied together to support each other through the hard times. As restrictions began to lift, The Catalina Island Company introduced the Unquarantini cocktail to celebrate the island reopening to the public. Since then, the island of romance has been thriving.

Whether you’re looking for sun and sport, or just postcard perfect views of the Pacific Ocean, come be a part of Catalina history. 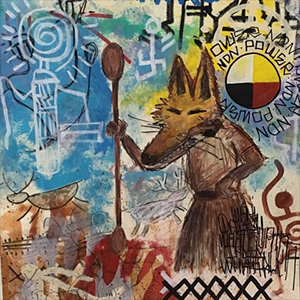 The First Islanders
Catalina Island has been home to many inhabitants over the years, but the Tongva who lived here 8,000 years ago are the earliest known islanders. Catalina honors the Tongva connection to the island in many ways. You can read articles about Tongva life on the island through the Catalina Island Conservancy. The Catalina Museum for Art & History is currently hosting an exhibit dedicated to contemporary Tongva artists and their work.
More Info 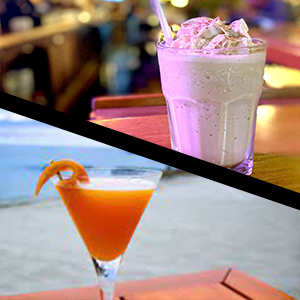 Island Libation
The island’s famous Buffalo Milk cocktail was invented in the 1970’s by a bartender named Michael Hoffler at the Harbor Reef in Two Harbors when it was still called Doug’s.
More Info

THE UNQUARANTINI
The Catalina Island Company invented a signature drink to celebrate the post-Covid reopening of the island - the unquarantini!
More Info 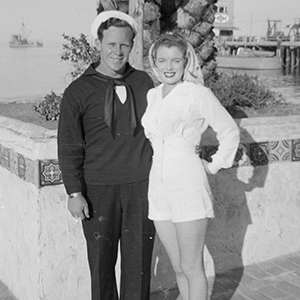 A Star Resident
Marilyn Monroe lived on Catalina Island for one year when she was a young newlywed. Although the circumstances of Marilyn’s marriage were tragic, pictures from that time capture a vibrant young woman on the cusp of becoming a world-famous star.
More Info

Murder In Paradise?
The 1915 fire on Catalina Island was devastating, but an oral history cassette tape made in the 1970’s indicated that it may have been something even worse - attempted murder. When the tapes were made, the Windle Family was one of the most well-respected and longest-standing families living on Catalina Island. According to Windle family lore, during the heat of the fire, several prominent citizens had to rescue the mother-in-law of the owner of the Hotel Rose. Apparently, she had been padlocked in the attic of the hotel!

There were even more suspicious circumstances surrounding the fire. A smaller fire was set all the way across town, drawing away the firemen and many of the resources before the main fire broke out at the Hotel Rose. No one knows for certain if the Hotel Rose fire was set deliberately, but a woman padlocked in an attic sounds like something straight out of a gothic horror story.
More Info 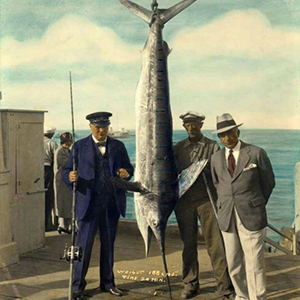 The Big Kahuna
Winston Churchill landed a 188-pound marlin swordfish during a brief visit to Catalina Island in 1929. Many members of the Tuna Club were dismayed by this catch. Some of them had been trying to hook a big one for more than ten years.
More Info 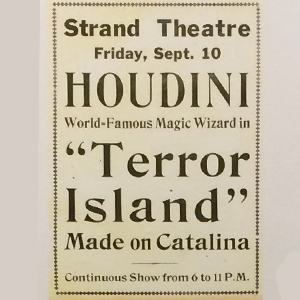 Lucky Escape
While filming his movie Terror Island, famous magician and escape artist Harry Houdini narrowly escaped drowning off the coast of Catalina. Houdini and his crew were using the Catalina Flyer to help shuttle equipment back and forth, when the boat encountered unusually turbulent seas. Houdini valiantly dove into the cold waters to try to assist the boat, but the sea proved too rough for him. Luckily, he was saved by Avalon deep sea divers Charles Toomoth and Tinch Moricich. Ultimately, the boat was rescued by a group of determined Catalina locals.
More Info


Cheers!
Did you know that there is a vineyard on Catalina? Rusack Winery grows both Chardonnay and Pinot Noir on Catalina’s remote southwest facing hillside. Alas, there are no wine tastings at this time, but you can sign up for the Isla Wine Circle Club to order the wines online.


A Hole In One
Built in 1892, Catalina’s golf course is the oldest course in Southern California.
More Info


20-Something Miles Across The Sea
The Four Preps made Catalina famous with their song ‘26 Miles Across the Sea’ written by Bruce Belland, but apparently the island is closer to 22 miles across the sea, depending on where you are on the shore.
More Info


California's Galapagos
Catalina is part of the Channel Islands, which have the reputation of being California’s Gallapogos due to their unique biodiversity. Catalina is home to over 60 plant, animal and insect species that can’t be found anywhere else on earth.
More Info


Eureka!
Although gold miners did briefly seek their fortune on Catalina Island in the 1800’s, the boom was short-lived. Claims of Catalina gold remain suspect, but silver, lead and zinc were all found on the island.
More Info


Natural Wonders
In 1926, William Wrigley, Jr. and a business associate named D.M. Renton were driving across the island when their car got stuck in the mud. Through this fortuitous accident, Renton discovered that Catalina produces particularly fine clay. Wrigley opened a factory called Catalina Clay Products which began to produce brightly colored dishes and tiles. Although the studio factory closed in the 1930’s, Catalina Pottery remains highly popular collector’s items to this day.
More Info


Sunny With A Chance Of Smiles
Local legend claims that Catalina has perfect weather, which is pretty true. It’s rarely hotter than 85 on the island, or cooler than 65.
More Info


Stay Frosty
Although Catalina is known for its perfect weather, it did snow once in the 1940’s!
More Info