City Of Avalon On Catalina Island

With its evocative name inspired by an Alfred Lord Tennyson poem, Avalon has been captivating travelers and dreamers for many years. Built along the crescent shaped coast of beautiful Avalon Bay, Avalon is the only incorporated city on Catalina Island. It is officially considered the southernmost city in Los Angeles County! Part of the Channel Islands, Catalina is only a short boat ride from the harbor in Newport Beach, and other parts of the coast. With its white beaches and clear aqua water, many visitors have compared Avalon to a mini-Capri.

Avalon, and many other parts of Catalina Island, were originally home to the people of the Tongva tribe. Unfortunately, the native population was forced off the island when California was colonized by Spain. During the 1800’s, intrepid tourists set up a tent city on Avalon every summer. Later, with its perfect climate and glamorous casino, Avalon became a popular getaway for the rich and famous. Now home to a wide variety of hotels, restaurants, and boutiques, Avalon is the perfect place for a fun-filled escape. 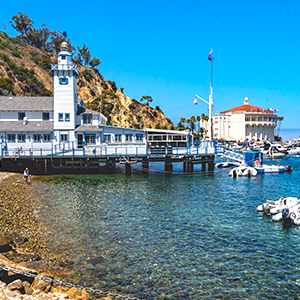 Today, Avalon, CA is a small, but bustling town. There are less than 4,000 residents on Catalina - most of them living in Avalon, but the Island sees up to one million visitors a year. Avalon has its own hospital, police and fire department, but they also receive backup from the mainland, when needed. All schools on the island are officially part of the Long Beach Unified School District.

Visitors looking to soak in some rays can chill on one of Catalina’s three public beaches South Beach, Middle Beach and Step Beach. For those seeking a more exclusive experience, Descanso Beach is a private beach with cabanas and lounge chairs available to rent, as well as an open air restaurant and bar. After a quick dip, stroll the many restaurants and shops along Crescent Avenue, also known as Front Street to the locals.

Make sure you visit some of the most popular attractions on this enchanted isla, including the historic Catalina Casino, the striking Green Pier, the Lover’s Cove Marine Preserve and the Tour Plaza which hosts a bounty of exciting ways to explore the island of Santa Catalina, CA. Grab your snorkel gear and head to the Casino Point Dive Park to see some of the island’s unique sea life, including the famous garibaldi. After your stay, you can find your way home again via the island’s Ferry Terminal. As you sail away, take one last look at this magical oasis and start planning your next visit.